Invincible microbe : tuberculosis and the never-ending search for a cure 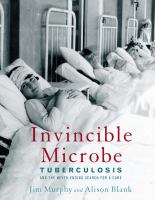 Book
"This is the compelling, suspenseful, down-to-earth story of a killer that has been stalking and doing away with people for thousands of years: Tuberculosis. For centuries TB in many forms was treated with everything from poultices and potions to the king's touch. The microorganism that causes the disease was eventually identified, more effective treatments were developed, and the cure for TB was thought to be within reach. But the TB germ simply will not die; drug-resistant varieties continue to plague and panic the human race. The "biography" of this deadly germ, an account of the diagnosis, treatment, and "cure" of the disease over time, and the social history of an illness that could strike anywhere but was most prevalent among the poor are woven together in an engrossing narrative supported by 70-plus archival prints and photographs. Includes bibliography, source notes, and index"--