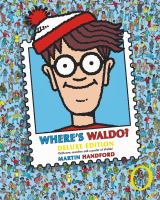 The reader follows Waldo as he hikes around the world and must try to find him in illustrations of some of the crowded places he visits.