True stories of World War I 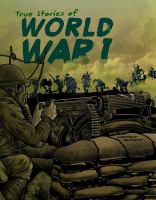 "In graphic novel format, tells the stories of six men who fought for their countries during World War I"--Provided by publisher.