The spymasters a men at war novel 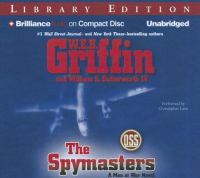 Summer 1943. Two of the Allies' important plans for winning World War II are at grave risk-Operation Overlord for the invasion of France, and the Manhattan Project in the race to build the atomic bomb. It's up to Dick Candy of the OSS and his team to save the day. But they have their work cut out for them. They'll have to not only figure out how to sabotage Germany's new 'aerial torpedoes' but also discover who the spy is on the Manhattan Project and stop them.