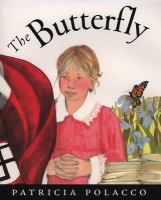 Book
During the Nazi occupation of France, Monique's mother hides a Jewish family in her basement and tries to help them escape to freedom.