Bigfoot boy : Into the woods 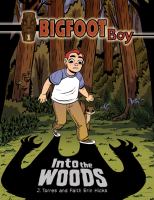 Book
Rufus is bo-o-o-ored at his grammy's house in the country. But when he follows a girl into the woods and finds a totem in a hollowed-out tree, things become a whole lot more interesting. Especially when he reads the word etched into the magical talisman: "Sasquatch.".