The mark of Athena 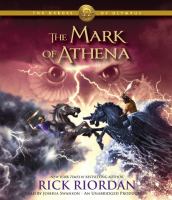 "The Greek and Roman demigods will have to cooperate in order to defeat the giants released by the Earth Mother, Gaea. Then they will have to sail together to the ancient land--Greece itself--to find the Doors of Death"--Provided by publisher.