The World until yesterday [what can we learn from traditional societies?] 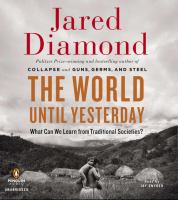 Drawing extensively from his field work in the Pacific Islands and with other people groups, Jared Diamond gives a firsthand picture of the human past as it had been for millions of years, a past that has mostly vanished, and what the differences between that past and our present modern society mean for our lives today.