No lie, I acted like a beast! : the story of Beauty and the Beast as told by the Beast 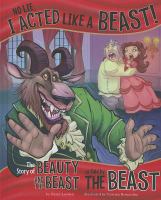 Book
The Beast relates the true story of how he was unintentionally rude to a fairy while preparing for an audition, then won the heart of a beautiful girl despite his appearance and odor.