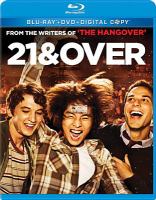 On the day before a critical med school, interview, straight A college student Jeff Chang gets a surprise visit from his two best buds to celebrate his twenty-first birthday. In no mood to party, Jeff finally agrees to a single drink, which quickly leads to an over the top, out of control night filled with epic beer pong, smoking hot coeds and one angry buffalo. Can Jeff's friends get their plastered pal cleaned up in time for his morning appointment?