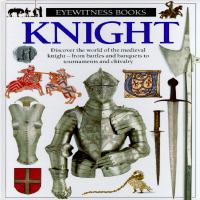 Book
Discusses the age of knighthood, covering such aspects as arms, armor, training, ceremonies, tournaments, the code of chivalry, and the Crusades.