These few precious days : the final year of Jack with Jackie 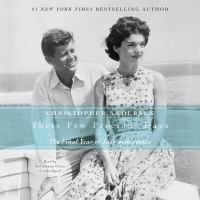 Jack and Jackie Kennedy were the emblem of a generation. Their wealth, beauty, elegance, and youth were revered by the public--and still are to this day. The forty-six-year-old president and his glamorous thirty-three-year-old wife may have had everything, but one question remains: After the affairs and humiliations, the triumphs and tragedies, in the end--at that moment when Jack was killed with Jackie at his side--did the president and his First Lady truly love each other? Packed with revelations about the First Couple, These Few Precious Days will amaze the world with the whole story of Jack and Jackie's final year together.