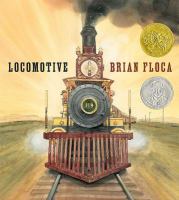 A visual exploration of America's early railroads that examines the sounds, speed and strength of the fledgling transcontinental locomotives and the experiences of pioneering travelers.