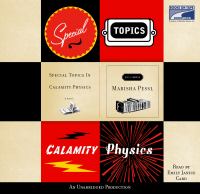 Available as a download from OWWL2go with a valid OWWL borrower card.
Marisha Pessl's mesmerizing debut has critics raving and heralds the arrival of a vibrant new voice in American fiction. At the center of this "cracking good read" is clever, deadpan Blue van Meer, who has a head full of literary, philosophical, scientific, and cinematic knowledge. But she could use some friends. Upon entering the elite St. Gallway school, she finds some--a clique of eccentrics known as the Bluebloods. One drowning and one hanging later, Blue finds herself puzzling out a byzantine murder mystery. Nabokov meets Donna Tartt (then invites the rest of the Western Canon to the party) in this novel.