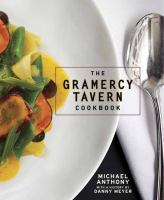 "One of the best New York restaurants, a culinary landmark that has been changing the face of American dining for decades, now shares its beloved recipes, stories, and pioneering philosophy. Opened in 1994, Gramercy Tavern is more than just a restaurant. It has become a New York institution earning dozens of accolades, including six James Beard awards. Its impeccable, fiercely seasonal cooking, welcoming and convivial atmosphere, and steadfast commitment to hospitality are unparalleled. The restaurant has its own magic--a sense of community and generosity--that's captured in these pages for everyone to bring home and savor through 125 recipes. Restaurateur Danny Meyer's intimate story of how Gramercy was born sets the stage for executive chef-partner Michael Anthony's appealing approach to American cooking and recipes that highlight the bounty of the farmer's market. With 200 sumptuous photographs and personal stories, The Gramercy Tavern Cookbook also gives an insider look into the things that make this establishment unique, from the artists who have shaped its decor and ambience, to the staff members who share what it is like to be a part of this close-knit restaurant family. Above all, food lovers will be inspired to make memorable meals and bring the warmth of Gramercy into their homes"--