The goldfinch [a novel] 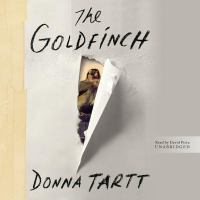 A young boy in New York City, Theo Decker, miraculously survives an accident that takes the life of his mother. Alone and abandoned by his father, Theo is taken in by a friend's family and struggles to make sense of his new life. In the years that follow, he becomes entranced by one of the few things that reminds him of his mother; a small, mysteriously captivating painting that ultimately draws Theo into the art underworld.