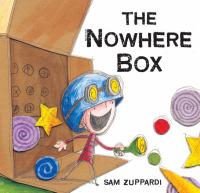 A little boy tries to get away from his two little brothers because they are always following him around. George, the young boy, discovers an empty box from the new washing machine and hides in it but finds out it is lonelier than he thought.