When the beat was born : DJ Kool Herc and the creation of hip hop 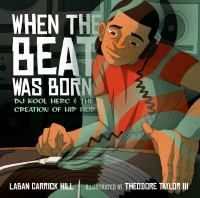 This is the story of DJ Kool Herc and how he invented a new kind of music that would change the world.