Dare the wind : the record-breaking voyage of Eleanor Prentiss and the flying cloud 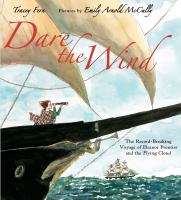 Ellen Prentiss's papa said she was born with saltwater in her veins, so he gave her sailing lessons and taught her how to navigate. As soon as she met a man who loved sailing like she did, she married him. When her husband was given command of a clipper ship custom-made to travel quickly, she knew that they would need every bit of its speed for their maiden voyage: out of New York City, down around the tip of Cape Horn, and into San Francisco, where the Gold Rush was well under way. In a time when few women even accompanied their husbands onboard, Ellen Prentiss navigated their ship to set the world record for speed along that route.