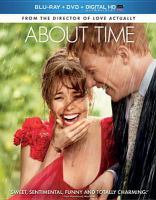 The night after another unsatisfactory New Year party, Tim₂s father tells his son that the men in his family have always had the ability to travel through time. Tim can₂t change history, but he can change what happens and has happened in his own life, so he decides to make his world a better place by getting a girlfriend. But as his unusual life progresses, Tim discovers that, in the end, making the most of life may not need time travel at all.