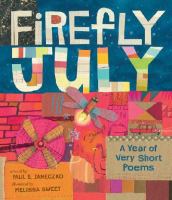 A selection of short American poems dealing with the four seasons and the different weather events and animal patterns that can occur within each.