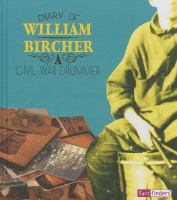 Book
"Presents excerpts from the diary of William Bircher, a 15-year-old Minnesotan who was a drummer during the Civil War"--