My Paris kitchen : recipes and stories 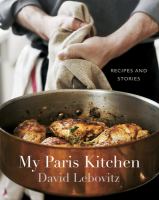 Book
"A collection of stories and 100 sweet and savory French-inspired recipes from Chez Panisse pastry chef turned popular food blogger David Lebovitz, reflecting the way modern Parisians eat today and featuring lush photography taken around Paris and in David's Parisian kitchen. French cooking has come a long way since the days of Escoffier. The culinary culture of France has changed and the current generation of French cooks, most notably in Paris, are incorporating ingredients and techniques from around the world. In My Paris Kitchen, David Lebovitz remasters the French classics, introduces lesser known French fare, and presents 100 recipes using ingredients foraged in the ethnic neighborhoods of Paris. Stories told in David's trademark style describe the quirks, trials, and joys of cooking, shopping, and eating in France, while food and location photographs reveal modern life in Paris"--