Creativity, Inc. : overcoming the unseen forces that stand in the way of true inspiration 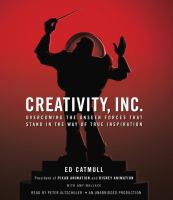 "In 1986, Ed Catmull co-founded Pixar, a modest start-up with an immodest goal: to make the first-ever computer animated movie. Nine years later, Pixar released Toy Story, which went on to revolutionize the industry, gross $360 million, and establish Pixar as one of the most successful, innovative, and emulated companies on earth. This book details how Catmull built an enduring creative culture -- one that doesn't just pay lip service to the importance of things like honesty, communication, and originality, but committed to them, no matter how difficult that often proved to be. As he discovered, pursuing excellence isn't a one-off assignment. It's an ongoing, day-in, day-out, full-time job. And one he was born to do"--