I am Rosa Parks 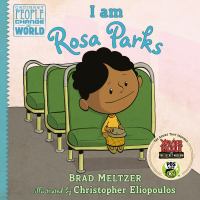 Book
Recounts Rosa Parks' daring effort to stand up for herself and other African Americans by helping to end segregation on public transportation.