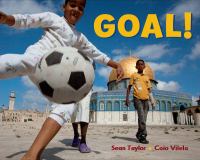 "Where there's a ball . . . there will always be someone who wants to play soccer. Whether in Tanzania or Togo, Burma or Brazil, children love soccer. GOAL! celebrates the sport's power to bridge cultural divides and bring together the many and diverse people of the world. Filled with fun facts and striking photos, this book is a poetic snapshot of soccer around the globe, available just in time for the 2014 World Cup!"--