Seriously delish : 150 recipes for people who, like, totally love food 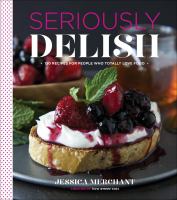 Book
"The eagerly awaited first cookbook from the wildly popular blog How Sweet Eats, Jessica Merchant, creator of the popular food blog How Sweet Eats, has now created her first cookbook, Seriously Delish. Her playfulness jumps off the page in her inventive and incredibly delicious recipes, such as Amaretto-Butternut Squash Soup with Cinnamon Toast Croutons, Mini Crab Cakes with Sweet Corn and Blueberry Salsa, and Fleur de Sel Caramel Bourbon Brownie Milk Shakes. Her sense of humor, which brings millions of visitors to her site, shows through in chapter titles like "Breakfast (for Dinner?)" and "Salad, Soups, and Vegetable-like Things (Ugh, if We Must)." Merchant makes food that people get excited about, nothing run-of-the-mill or expected. As an added bonus, all of the photographs in the book were taken by Merchant herself, giving her cookbook the personal touch that her fans love and newcomers will appreciate. Seriously Delish features imaginative recipes that are tasty and original and bring readers to a place where cooking becomes adventurous and food becomes fun"--