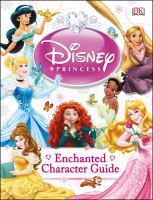 Introduces a selection of Disney princesses, describing their personalities, background, and how they interact with the other Disney characters in their stories.