LEGO Star Wars. The dark side 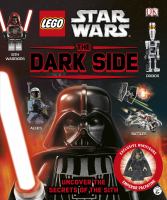 Book
Examines the characters and plotlines of the dark side of the "Force," from Sith warriors to the power of Imperial forces.