The blood of an Englishman : an Agatha Raisin mystery 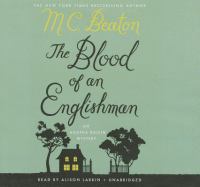 Even though Agatha Raisin loathes amateur dramatics, her friend Mrs. Bloxby, the vicar's wife, has persuaded her to support the local pantomime. Stifling a yawn at the production of Babes in the Woods, Agatha watches as the baker, playing an ogre, struts and threatens on the stage. Then a trapdoor opens ... followed by a scream and then silence. Surely this isn't the way the scene was rehearsed? When it turns out the popular baker has been murdered, Agatha puts her team of private detectives on the case. They soon discover more feuds and temperamental behavior in amateur theatrics than in a professional stage show - and face more and more danger as the team gets too close to the killer.