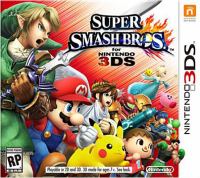 Fight as one of the Nintendo characters, using the all-new smash run mode, and customize fighters' special attacks and strengths as you play.