Beetle busters : a rogue insect and the people who track it 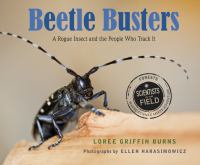 Book
This book about the tree-killing Asian longhorned beetle reveals how the help of everyday people, their neighborhoods, teams of beetle-sniffing dogs, and a nationwide effort from bug scientists to tree doctors are working to eradicate this invasive pest.