The blood of Olympus 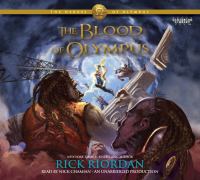 The Greek and Roman demigods must simultaneously prevent the earth mother, Gaea, from waking and stop war from breaking out at Camp Half-Blood.