The iridescence of birds : a book about Henri Matisse 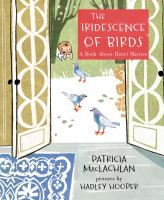 If you were a boy named Henri Matisse who lived in a dreary town in northern France, what would your life be like? Would it be full of color and art? Full of lines and dancing figures? Find out in this unusual picture book about one of the world's most famous and influential artists.