Arrow to the sun; a Pueblo Indian tale. 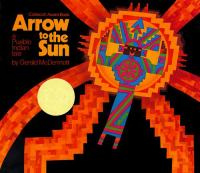 An adaptation of the Pueblo Indian myth which explains how the spirit of the Lord of the Sun was brought to the world of men.