Star wars : the magic of myth 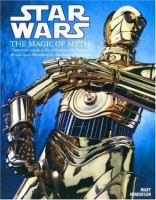 Book
"The story of Star Wars, The Empire Strikes Back, and Return of the Jedi has had such an influence on our culture that it prompted Joseph Campbell, one of the most original and influential thinkers of our time, to hail the trilogy as a masterpiece of "creative mythology" - a work of art that gives new depth and dimension to our sense of self and our sense of place in the universe. For millions of viewers, the Star Wars epic presents a special vision that incorporates the wisdom and symbols of age-old myths in dynamic new ways that speak uniquely and unforgettably to our modern-day quest for meaning."--BOOK JACKET. "Using hundreds of illustrations, Star wars: The Magic of Myth presents the relationship between the creation of the movie trilogy and the mythic structure on which it is based. Here is a rich, detailed, and fascinating account of how characters, costumes, and settings were modeled on some of the most powerful imagery from the realms of history, myth, and the imagination. Incorporating elements from Greek mythology to Flash Gordon, Star Wars is not only entertainment in its grandest form but, like all great myths, a limitless source of imagery, insight, and universal emotion."--BOOK JACKET.