Founding fathers : the fight for freedom and the birth of America 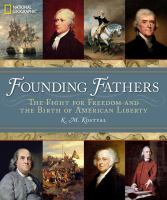 Book
Kostyal tells the story of the great American heroes who created the Declaration of Independence, fought the American Revolution, shaped the US Constitution--and changed the world. The era's dramatic events, from the riotous streets in Boston to the unlikely victory at Saratoga, are punctuated with lavishly illustrated biographies of the key founders--Alexander Hamilton, John Adams, Ben Franklin, Thomas Paine, Thomas Jefferson, George Washington, and James Madison--who shaped the very idea of America. An introduction and ten expertly-rendered National Geographic maps round out this ideal gift for history buff and student alike. Filled with beautiful illustrations, maps, and inspired accounts from the men and women who made America, Founding Fathers brings the birth of the new nation to light.