The job : a novel 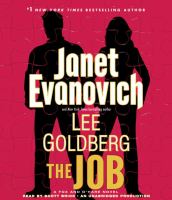 The FBI had one demand when they secretly teamed up Special Agent Kate O'Hare with charming con man Nicolas Fox, bring down the world's most-wanted and untouchable felons. This time it's the brutal leader of a global drug smuggling empire. The FBI doesn't know what their target looks like, where he is, or how to find him, but Nick Fox has a few tricks up his sleeve to oust this particular Knipschildt chocolate-loving drug lord.