Hands of God : the threshold of salvation 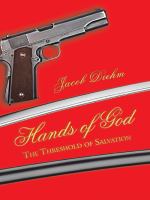 Book
"Once upon a time, Seth Alexto was an honest family man with a beautiful wife and son. That life ended when a drunk driver -- the rich son of the new mayor -- slammed into the family's car and ended the lives of Crystal, his wife, and Alex, his son. From that day forward, Seth's life has been one of turmoil. As his pain causes him to spiral downhill, he meets two women, one of whom seems to be an angel; when she touches him, it burns and he flees. The next day, he finds his arms are covered in strange markings -- and he soon learns he can see the sins of other people when he touches them. Seth has been inadvertently drawn into an underground war between heaven and hell. He has been made a hand of God, a warrior among God's heavenly forces -- a title never yet held by a man. As he learns about his new role and skills, he finds himself fighting the demonic armies of hell. But Lucifer has a new plan, one in which Seth will play a vital part. Seth must fight evil, battle his past, and win the hearts and minds of God's angels -- or die trying" -- provided by the publisher.