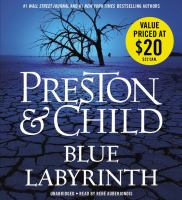 Available as a download from OWWL2go with a valid OWWL borrower card.
#1 New York Times bestselling authors Doug Preston and Lincoln Child return with their next blockbuster Pendergast novel. A long-buried family secret resurfaces when one of Aloysius Pendergast's most implacable enemies shows up on his doorstep as a murdered corpse. The mystery has all the hallmarks of the perfect murder, save for an enigmatic clue: a piece of turquoise lodged in the stomach of the deceased. The gem leads Pendergast to an abandoned mine on the shore of California's desolate Salton Sea, which in turn propels him on a journey of discovery deep into his family's sinister past. But Pendergast learns there is more at work than a ghastly episode of family history. He is soon being stalked by a subtle killer bent on vengeance over an ancient transgression. In short order, Pendergast is caught in a wickedly clever plot, which will leave him stricken in mind and body ... and may well end with his death.