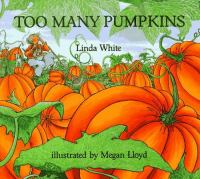 Rebecca Estelle, an old woman who has hated pumpkins ever since she was a girl and her family had nothing else to eat, finds herself with a full crop of them.