Hell on wheels : an illustrated history of outlaw motorcycle clubs 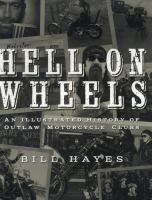 Book
"A gripping history of outlaw motorcycle club culture from its beginnings to the present day. In a world where most of us roll over when confronted by the power of authority, the antihero figure of the outlaw biker stands beyond the crowd, a beacon of social freedom. By choosing to live outside of society's conventions, the one-percenter has the inner strength to act on his own convictions. Though most of us are too timid to venture into these outer margins of society, the one-percenter not only enters those margins--he stomps on them. In Hell on Wheels, avid motorcyclist Bill Hayes dives deep into the world of the outlaw motorcyclist, exploring legendary clubs like the Hells Angels, the Bandidos, the Outlaws, the Vagos, the Pagans, the Mongols, and many others, allowing the reader to peer into motorcycle club culture. Featuring both modern and historical photos, as well as a rare collection of club memorabilia found in no other publication, Hell on Wheels traces the roots and development of motorcycle club culture: its origins in the years following World War II; the turbulent 1960s and the disco era; the transition of clubs from loose groups of hooligans to highly organized machines; and, more recently, the copious clashes with law enforcement amid the post-9/11 world of the Patriot Act. The one-percenter has become one of the most popular figures in outlaw culture, and Hell on Wheels is his story"--
"Bill Hayes' Hell on Wheels is an illustrated history to many motorcycle clubs' histories, including the stories, slogans, insignias, characters, and conflicts that made each club what it is today"--
Place Hold
Add to Basket Remove from Basket
Print / Email
► Additional Details
► Reviews, Series, Suggested Reads, Summaries & More
► Shelf Browser
► MARC Record