Ashley Bryan's puppets : making something from everything 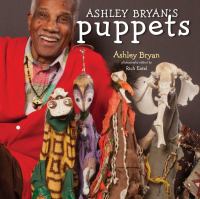 Introduces puppets created out of found objects by describing each with a poem.