The southern journey of Alan Lomax : words, photographs, and music 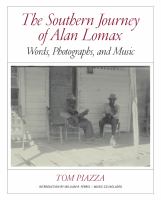 More than fifty years ago, on a trip dubbed 'the Southern Journey, ' Alan Lomax visited Virginia, Georgia, Alabama, Mississippi, Kentucky, and Tennessee, uncovering the little-known southern backcountry and blues music that we now consider uniquely American. Lomax's camera was a constant companion, and his images of both legendary and anonymous folk musicians complement his famous field recordings. These photographs--largely unpublished--show musicians making music with family and friends at home, with fellow worshippers at church, and alongside workers and prisoners in the fields. Discussions of Lomax's life and career by his disciple, William Ferris, and a lyrical look at Lomax's photographs by novelist and music writer Tom Piazza, enrich this collection.