Kid President's guide to being awesome 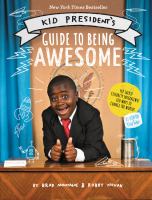 "This is LIFE, people! You've got air coming through your nose! You've got a heartbeat! 'That means it's time to do something!' announces Kid President in his book, Kid President's Guide to Being Awesome. From YouTube sensation (75 million views and counting!) to Hub Network summer series star, Kid President--ten-year-old Robby Novak--and his videos have inspired millions to dance more, to celebrate life, and to throw spontaneous parades. In his Guide to Being Awesome, Kid President pulls together lists of awesome ideas to help the world, awesome interviews with his awesome celebrity friends (he has interviewed Beyoncé!), and a step-by-step guide to make pretty much everything a little bit awesomer. Grab a corn dog and settle in to your favorite comfy chair. Pretend it's your birthday! (In fact, treat everyone like it's THEIR birthday!) Kid President is here with a 240-page, full-color Guide to Being Awesome that'll spread love and inspire the world"--