Wangari Maathai : the woman who planted millions of trees 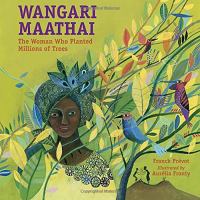 Wangari Maathai received the Nobel Peace Prize in 2004 for her efforts to lead women in a nonviolent struggle to bring peace and democracy to Africa through its reforestation. Her organization planted over thirty million trees in thirty years.