A day with the animal firefighters 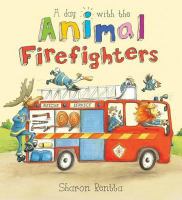 Book
Nee-naw! Nee-naw! Nee-naw! It's the Animal Firefighters to the rescue! New recruit, Firefighter Moose, is desperate to drive the fire engine, but he's not allowed to until he's got Experience. First he must learn to climb ladders, grapple with fire extinguishers - and go on a number of daring missions. His finest moment comes when he rescues twenty-one guinea pigs from a top-floor flat. He wins an award for his Bravery and Initiative ... and at last he's allowed to drive the fire engine, too!