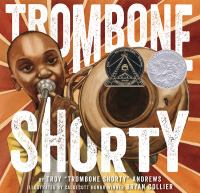 Book
A Grammy-nominated headliner for the New Orleans Jazz Fest describes his childhood in Tremé and how he came to be a bandleader by age six.