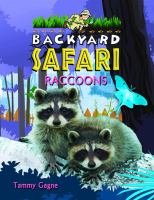 Book
"Raccoons can be found nearly everywhere in the United States--even in your own backyard! Still, these common creatures are fascinating. With their black masks, ringed tails, and tiny hands, they are as adorable as they are mischievous. Join Zoe and Ethan as they head out in search of these furry bandits. You might even catch one in the middle of a garbage can raid."--Back cover.