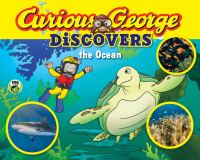 Book
George and the Man in the Yellow Hat travel under the sea on a submarine to find a lost satellite and learn about the plants and animals living in the ocean.